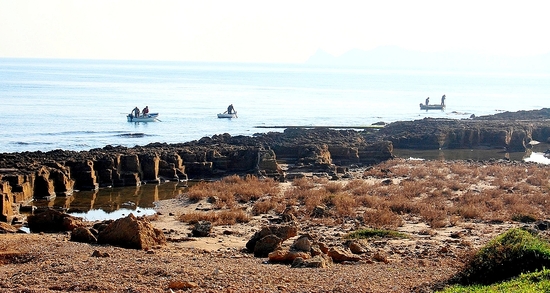 The "tosca"sandstone's golden colour is an essential element of the local architecture and is predominantly present in all the town’s corners, which gives it an ancient monumental touch.

It is a calcareous sandstone which was formed by sand dunes about one hundred thousand years ago. The cut stone still conserves the dune’s stratums (“llavades”) as well as the fissures (“pels”) used by the “arrancadors” (stone quarry workers) as an axis to obtain the basic blocks which were subsequently worked and sculpted. Undoubtedly, the most important sources of the local sandstone “pedreres” (quarries) not only in Xábia, but in the entire Valencian coastline, are the mountain sites: Muntanyars, (the Dalt (high quarry) and the Baix (low quarry). These large quarries were exploited from the Roman Period until 1972 when its extraction was prohibited. Another major quarry site is the Cova Tallada (Sculpted Cave), located at the foot of the cliffs of Cap de Sant Antoni, in whose interior, artefacts from the Andalusian Age have been discovered, which allows us to consider that this quarry had been used since the 12th Century. Currently, these “toscars” (sandstone quarries) constitute a valuable natural heritage, which not only reveal the scenery and climate of the past, but also the techniques and traditional procedures for the extraction of the “tosca” sandstone blocks, an exceptional and essential component of Xàbia’s rich traditional architecture.