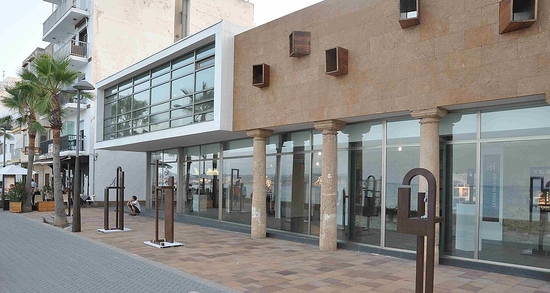 Another outstanding building in the port zone is the Casa del Cable (Cable House), built in 1860 to house the telegraph station which linked the Peninsula to Ibiza by means of a submarine cable.

In the mid 19th Century, the urban landscape of the Aduanas neighbourhood was defined by the raisin warehouses and the humble fishermen houses which they had built over the years. At that time, the establishment and development of the telegraph network was taking place in the country with the first submarine cable installations.

In 1860, the cabling works began to communicate the Balearic Islands with the Spanish peninsula.

The proximity of Xàbia to Ibiza and the ideal nature of its bay made it advisable to install the station where the submarine telegraph cable would arrive. The construction of the Casa del Cable began at that time.

Around 1870, the cabling was repaired between Xàbia-Sant Josep de Sa Talaia (Ibiza) and Barcelona-Maó, which broke down with certain frequency until it definitively ceased to function in the 50's decade of the last Century.

However in addition between the last 25 years of the 19th Century and during the first decade of the 20th century, the Casa de Cable was an Oratory or Chapel which provided religious services to the fishermen's neighbourhood and provided custody to the sculpture of the Virgin Mary known as Nuestra Señora de Loreto.

The importance of this station as a telegraph link to the islands meant that on diverse occasions, military garrisons were installed in order to guarantee the telegraph communications.

The original structure of the building has a square floor plan, with sides a little over 9 m, with two floors and a tiled hip roof. Several refurbishments were subsequently carried out and the four "tosca" sandstone columns were added which buttress the terrace and form the nave ("naia") which is still conserved and which makes the house so singular.

The telegraph office was located on the ground floor, while the upper floor was occupied by rooms and a services office.

Attached to the south side of the house, there are other premises with only one floor and a gable roof, which were used as warehouses and other auxiliary household spaces.

After its remodelling, its halls are currently used for exhibits.