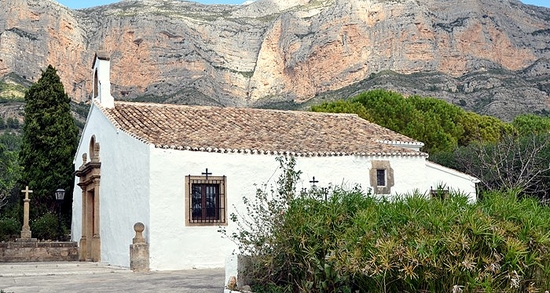 These buildings are named due to the fact that they were built during the Christian occupation period. Despite their name, they had extensive constructive duration due to their architectural simplicity. They were all built according to the same building scheme: Rectangular floor plan, tile gable roof, access door in one of the minor sides which was originally formed by an ashlar stonework doorway with a semi-circular arch. Austere interior divided into 2 or 3 sections separated by slightly pointed “tosca” sandstone arches. Opposite the door, there is an altar with images of the Sanctuary’s patron saints. They are:

-San Antonio (St. Anthony), now disappeared. It was located in the Cape that was named after it. There are only ruins of ceramic floor tiles. It was built due to the efforts of the nun, Caterina Bas (Sister Bassota). It was a temple for ascetic hermits, who like this nun, lived in the Holy Caves of the Cape: Cap de Sant Antoni.

-Pòpul (14th-15th Century) in the Jesús Pobre Motorway with paintings by Soler Blasco.

-Sta. Lucía (St. Lucy) and Sta. Bárbara (St. Barbara) (14th-15th). It is the most beautiful and representative. On the “Sta. Llúcia” Saint’s day on 13th of December, the town’s citizens ascend in a pilgrimage to the sanctuary on the top of a hill near the town but only accessible on foot.

The three structures have undergone subsequent modifications. They are currently municipal property.