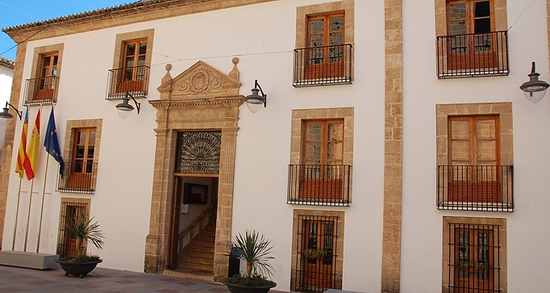 In front of the lateral façade of the Church, we find the Town Council,where the Ermita de San Cristóbal (17th Century) was originally located; it was constructed on an early Christian necropolis (graveyard) locally called: el fossar (14th-15th Century).

Among other uses, this former sanctuary was a Public School and subsequently served as a Chapel of the Virgen de los Desamparados (Virgin Mary of the Homeless) until 1890.

Of this original building, we highlight the characteristic porxens (roofed gallery) of the rear façade, which formed an open marketplace where the market exchange was celebrated. Of these five arches, now sealed, one is still open and connects the Plaça de Baix to the Plaça de l´Església (Church Square).

The current Town Council (18th-20th Century) has a façade with a particular Neo-Classic Style.