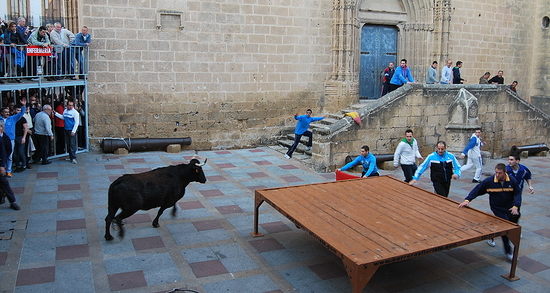 St. Sebastian is the Patron Saint of Xàbia. The origin of this title is immersed in legend. Some people think that centuries ago, he liberated Xàbia's citizens from the scourge of the Black Plague epidemic. For others, St. Sebastian is the Patron Saint of the Stonecutters, and given the town's artisan tradition of stone masonry work, it seems logical that they would grant him this title.

His holiday is celebrated on the 20th of January and until several years ago, it was limited to the celebration of a Mass and a string of fireworks called "tracas". Today thanks to the support of neighbours, although this holiday does not have the high-profile visibility of other major festivities such as the "Fogueres de Sant Joan" or the "Mare de Dèu de Loreto", it does have an events program which includes running of the bulls, street parades, children performances and sports activities. The street parade is now a typical feature which the Festivities Committee, accompanied by "dulzaina" (double-reed instrument) and tabalet (small drum) music, celebrates in the streets of the historical city centre to visit the different niches dedicated to the Saint in its streets.