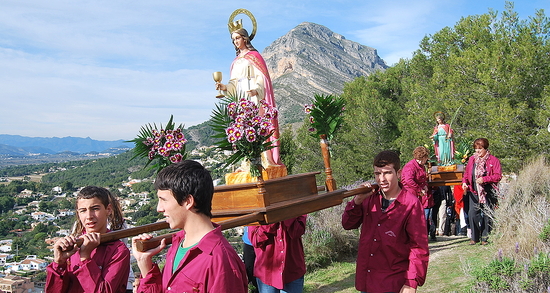 The sanctuary called Santa Llucía is located on a hill near the town. It was built in the early 16th Century. It is an austere building with a single nave and a rectangular floor plan. In the Middle Ages, people appealed to this Saint against eye diseases, probably because her name is associated with the light.

Her holiday is celebrated every 13th of December with a simple program which combines religion and popular festivity. That eve accompanied by dulzaina (double-reed instrument) and tamboril (small drum) music, the estate managers gather to place a bouquet of flowers in a niche located on its street. Pumpkin fritters (buñuelos de calabaza) and a sweet wine called "Mistela" are shared with all the people they meet along the way. On the morning of the 13th, the road which leads to its chapel is full of hundreds of neighbours and visitors who ascend in a pilgrimage.  After everyone is on top and following the Mass, there is a traditional "Chocolatada" (Hot Chocolate) which is served to all the participants.