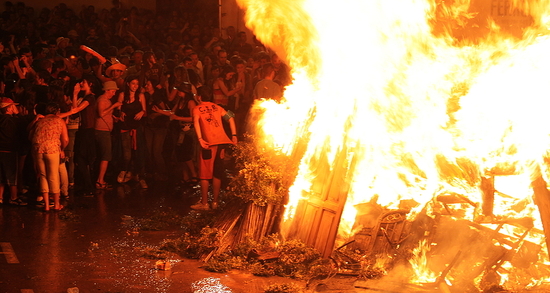 The "Nit dels Focs" is a magical and mysterious night with a Mediterranean essence which highlights the exceptional landscape of the Xàbia Historical City Centre.. Its recreational and participative nature, its symbolism, tradition and popularity have caused this Holiday to be declared of Tourist Interest.

The night of June 23rd begins with the «Cremà dels Focs» (Bonfires) in various locations of the old City Wall Gates. They are bonfires which are prepared by the association called "Peña L'Escaldà" and people jump over them wearing garlands on their heads like a crown. All the associations known as "peñas" which comprise the Sant Joan Festivities participate in them dressed in colourful shirts and distinctive emblems. They subsequently gather in the bonfire of "Foguera de «Trastos Vells» (Old Furniture Bonfire), which is organised by the association: Peña El Gerrot. There in the heat of the bonfire, they sing a typical St. John's song together with these lyrics....: “Como una flor que ebria de besos esclata, Jávea por San Juan en fiestas se desata…”

The night ends with a spectacular “Correfocs” (Firecracker Parade) which travels through the city's ring roads and follows the old route which corresponded to the old Fortified City walls.