Holidays in honour of Jesús Nazareno 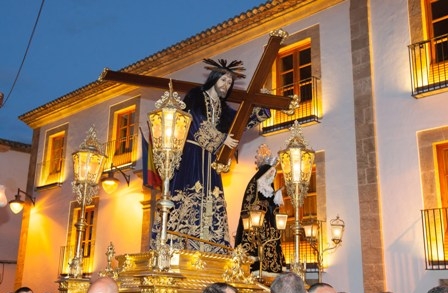 Although St. Sebastian is the Patron Saint of Xàbia, the Holidays in honour of "Jesús Nazareno" have the strongest popular support and devotion among Xàbia's citizens.

The Jesus of Nazareth Statue is kept in custody in the Sanctuary called "Ermita del Calvario" until the third Sunday of Lent, on that date, it descends in a procession to the Church called "Iglesia de San Bartolomé". The statue is worshipped here until the 3rd of May, when it is returned to the "Calvario" Sanctuary in another procession. When it arrives, there is a spectacular fireworks display. These holiday festivities also feature the traditional "bous al carrer" (running of the bulls), theaters and processions. On the 2nd of May, it is traditional to visit the streets of the Historical City Centre to look at the colourful "Cruces de Mayo", crosses made out of flowers by the neighbours which win local prizes based on their preparation, originality and beauty.