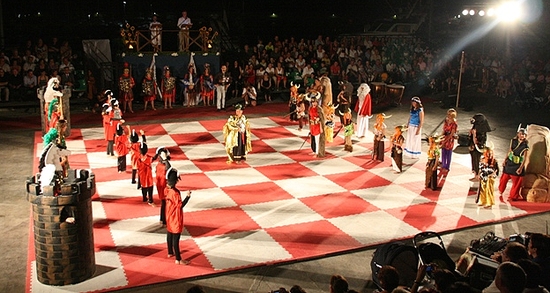 Since 1996, the Festivities Commission (Comissió de Festes Mare de Déu de Loreto) has organized the Live Chess of Xàbia, as the first event in the Festivities Program which this city celebrates in honour of the "Virgen de Loreto".

Declared a Holiday of National Tourist Interest since 2002, the Live Chess of Xàbia is celebrated in the Municipal Sports Centre at the end of July.

It is the performance of a theatre play which is based on a chess game.  The actors are a group of Xàbia children between the ages of 6 and 14 who scenically portray a different story each year. It is an original idea so that people can learn historical aspects related to our city in an educational way. Examples of recent performances: "Una partida para la paz", "Jaume I y Al-Azraq", or "Xàbia y la piratería". The games which take place are real chess games which have been disputed at some time in the history of this game, however it is not necessary for spectators to have any knowledge about chess in order to follow the game since they are actually watching a theatre performance.

The representation of the game is carried out in the presence of a narrator who is usually a journalist or writer from the city or district and the two Chess players are the local school champion and a guest of honour. In recent years, we highlight the participation by Pedro Duque, Matías Prats, Juan Carlos Ferrero, Juan Luís Arsuaga, Isabel Fernández, etc.