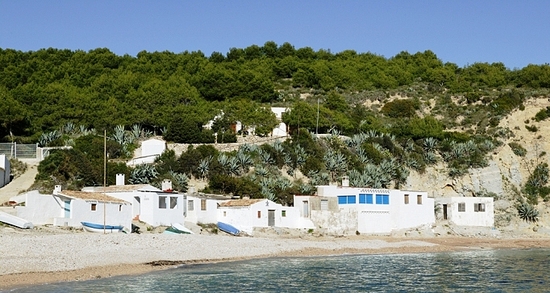 The Portitxol Bay has a border with the Cape: Cap Prim in the north and the Cape: Cap Negre in the South which protects it from the winds of the first and second quadrant. The section of the coast comprised by the Bay jointly with the nearby Portitxol island is one of Xabia’s most ecologically interesting and scenic landscapes. The bay’s geological composition determines its particular features. The majority of its northern section is comprised by marlstone and clays which vividly stand out from the rest of the Xabia coastline, primarily formed by limestone. The characteristics of these easily eroded rock materials prevent the cliffs of the Portitxol Bay from reaching a major height and their bases have accumulated numerous stone blocks which have become detached all along the coastline. The cliffs’ colours with grey and yellow tones provide a sharp contrast with the blue sea to create incredibly beautiful landscapes. Due to the importance of the vegetation in this zone in May 1999, the Valencian Government established two flora microreserves in the areas: Cap Prim and the Portitixol or Barraca Beaches. In the south end of the Bay, the landscape changes once more due to the limestone composition of Cap Negre which has impressive vertical walls that rise above the sea where it is possible to explore numerous caves and submarine cracks. From the Barraca Cove, the view is dominated by the Portitxol island which is just a few metres from the coast. In these beach with boulders and pebbles, it is possible to observe marine communities with major ecological interest such as those formed by the Mediterranean Cystoseira Brown algae, which clearly indicates the sea's excellent water quality.

The SL CV-97 and the SL CV-98 begin at the vantage point of the "Creu del Portitxol", the former goes to the tip of the Cap Prim and the late to the Cala Barraca, both let us discover the natural beauty of the coastline of Xàbia, they are part of the Xarxa d'Espais Naturals de Xàbia.