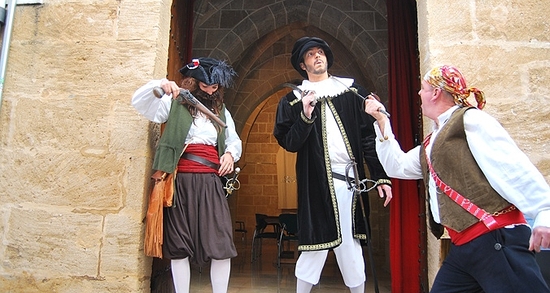 We invite the whole family to enjoy the cultural heritage and history of Xàbia in an entertaining and fun way with the Dramatized Guided Tours and Thematic Routes which will allow you to explore the town's history and our architectural, cultural and natural heritage, as well as our gastronomy and customs.

In the Dramatized Guided Tours, EL TESORO DE XÀBIA , three actors bring historical and anonymous characters to life who played a representative and outstanding role in the municipality. During their performance, they allude to historical events, legends, anecdotes and provide knowledge about relevant aspects of everyday life in Xàbia throughout the centuries.

The Treasure of Xàbia route travels through Xàbia Historical City Centre with celebrities such as St. Vicent Ferrer, the architect, Domingo Urteaga, Antoni Banyuls, and other anonymous characters such as pirates and French soldiers. In Spanish.

LA VILA NOCTURNA. SECRETOS DE LA XÀBIA MEDIEVAL (THE CITY AT NIGHT. SECRETS OF MEDIEVAL XÀBIA): Dramatized Guided Tour through the Xàbia city centre. A ghost travels through Xàbia recognizing the city of his grandparents and parents; Xàbia when it belonged to the Aragón Kingdom; the fortified walls of Xàbia besieged by pirates. The town of Xàbia 500 years ago is still present in its streets and palaces. In Spanish, English and French.

LA VILA NOCTURNA. VIVENCIAS DEL SIGLO XIX (THE CITY AT NIGHT. EXPERIENCES OF THE 19TH CENTURY): Dramatized Guided Tour through the Xàbia city centre. The political and economic changes of the 19th Century radically transformed the life and original features of Xàbia. A nocturnal stroll to discover what the city was like 150 years ago; its streets, its music, its dances and its vital rhythm. In Spanish, German, English and French.

XÀBIA, HISTORIA DE SU GASTRONOMÍA (XÀBIA, HISTORY OF ITS GASTRONOMY): Guided Gastronomical Route by the "Soler Blasco" Archaeological-Ethnological Museum and the Municipal Market with small food tasting dishes. The most basic agricultural products, olive oil, wine and fish have founded a cuisine and a pantry which unites cultures and territories; today, it is a value which distinguishes us. Following the route which several ingredients and other products travel, we will discover the history of gastronomy and the story of Xàbia's people. In Spanish, English and French.